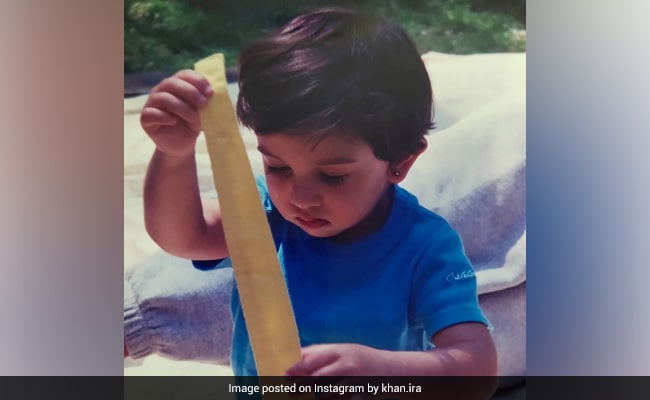 Keeping up with the spirit of “Flashback Friday”, Aamir Khan’s daughter Ira shared a super cute throwback picture on her Instagram profile, from her childhood days. In the photograph, little Ira can be seen looking at a dress in her hand amusingly. Ira added a dash of self-deprecating humour to her post and she wrote: “This is still how I look at complicated dresses.” She added the hashtags #fashiondiaster, #thenandnow and #whydoyouhavetogoandmakethingssocomplicated to her Instagram post.

Ira Khan, as a part of her “fashion disaster” series of posts, shared another throwback a few months ago. In the picture, Ira and Aamir could be seen standing next to a giant Christmas tree. In the pictures, the Lagaan actor can be seen sporting long hair and moustache – his look from the 2005 film Mangal Pandey: The Rising. Ira captioned the post: “Santa’s helper. I even have the ears for it.” She added the hashtags #throwback #christmas #missing #santashelper #elf #elfears #fashiondisaster #film and #nostalgia to her post.

Ira is the younger of Aamir Khan’s two children with his first wife Reena Dutta. Ira has studied music, while her brother Junaid often assists his father in filmmaking. Aamir Khan is now married to filmmaker Kiran Rao and the couple are parents to eight-year-old son named Azad. Ira made her directorial debut with a theatrical adaptation of Euripides’ Medea, which featured Hazel Keech in the titular role. It premiered in different cities across India in December last year.