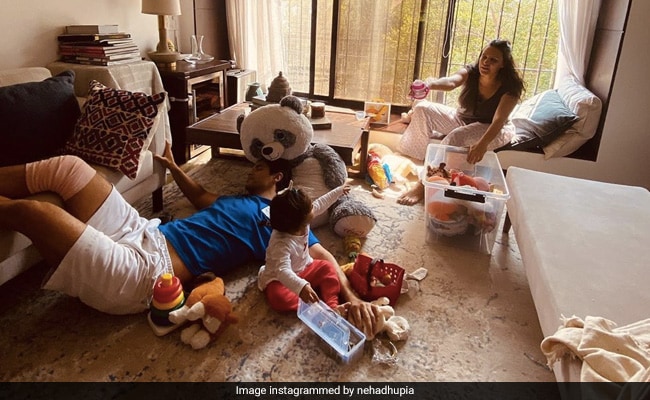 Neha Dhupia shared a glimpse of her favourite chilling spot on Instagram recently. The actress marked Day 10 of the three-week lockdown with a scene from her home, featuring all the key people – herself, husband Angad Bedi and daughter Mehra Dhupia Bedi. In the photo, Angad, who appears to have hurt his knee can be seen dozing off using a huge soft toy as his pillow. Angad’s one arm around baby Mehr suggests he was in charge of her while Neha was busy. In the picture, Neha can be seen trying to pass a water bottle to little Mehr, who is busy playing. How cute is this?

Neha Dhupia’s post offers a snippet of the easy breezy interiors of her house. Take a look at it here:

Other than chilling with Angad and Mehr, Neha Dhupia is spending her quarantine with a lot of yoga and craft sessions. In a post, Neha said that her “coping mechanism” during the lockdown is indulginh in some artwork with her daughter. “We’ve been doing some fun things together, but making this memory book has been an absolute delight. I know there’ll be many more craft masterpieces from her , but this is one of her first and with it, will remain a million sweet memories,” she wrote.

Neha also shared glimpses of her “yoga in the times of corona.”

Neha Dhupia and Angad Bedi often trend for their adorable family photos and loved-up moments. The couple married in May 2018 and Mehr was born in November the same year. Neha and Angad have carefully avoided sharing photos of Mehr on social media but the little one makes frequent appearances in the form of cute Instagram posts.